Item the first: “Such Great Heights”, by The Postal Service.

While that comparison is a fair one, it misses how much more of a pop sensibility Owl City has versus The Postal Service. “Such Great Heights” has several features that make it unusual. Its structure is verse, chorus, verse, chorus, bridge, chorus, but the bridge is a simple guitar solo over Tamborello’s loops and beats. In the verses, each phrase of Gibbard’s vocals crowd up against the next, barely ending before the next begins. Rhymes appear in odd places, and much of the chorus is sung on weak beats. Most notably, there’s no strong hook in the song, due in part to how Tamborello layers sonic elements that appear to be ignoring all of the others.

Compare that to “Fireflies”. It has an extremely traditional structure: verse, chorus, verse, chorus, bridge, verse, and chorus with repeat. The song leads with its hook, a four-bar synth line that runs throughout the verses. As in “Such Great Heights” the sonic layers build as the song goes, but each layer ties to previous ones, piling on orchestral strings, drums, bells, and more. Each phrase has room to breathe, and sticks firmly to the strong beats. All the song lacks is a truck driver’s gear change at the end.

This is not, by itself, a value judgment. I was struck by how two artists with very similar characteristics on the surface could illustrate the pop divide so cleanly.

These photos looks like we lived at the beach this year. That’s not far off the mark, actually. 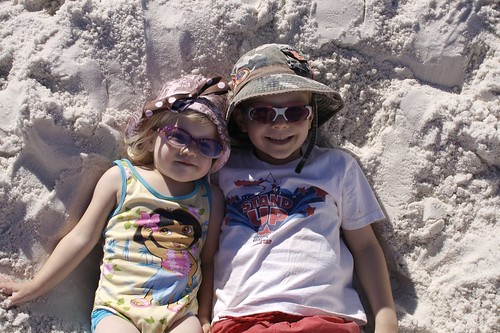 Even when they get a budget, OK Go still turns out excellent videos.