Vampires and werewolves tell Bella how astoundingly special she is, and Bella in turn faints a lot.

Mind you, I’ve still got a giant chunk of the last novel to go through, and the series as a whole has an OH JOHN RINGO NO vibe that’s only getting worse. We’ll see how I feel at the end.

Saturday night I had the privilege to see a house concert. Geof hosted Eric Peters at his condo clubhouse and the audience consisted of me and six other people. And Eric. Eric playing some really amazing music.

I don’t know if the concert would have been as amazing with any other singer. Would I have been as moved if it had been anybody else? Would I have connected to the songs in the same way if someone else had been singing? And I think the answer is no. The music was amazing and his singing even more so. He’s one of those rare people who actually sound better in person than on a record. And he truly has a gift for storytelling.

I enjoyed myself tremendously and can’t wait for August when he’s playing here in town again.

Geof got this great photo of Eric and the small group.

If you’re like me — and I know you are — then you like things that are awesome. And have I got something awesome for you!

Solomon Stone! He’s a half-vampire private eye who’s also a skateboard champ, and he’s so amazing that he has three fists of justice, and all of them are filled with revolvers. Chris Sims‘s creation is a sight to behold, and it is possible that you will not survive reading about his exploits.

The whole first issue is free to read online, and you can even grab a CBZ or PDF of the comic. And if you die from far surpassing the LD50 of awesome, you can thank me later.

As you know by now, I get on these wild crafting jags where I make one particular thing until I’m exhausted or until the next shiny thing catches my eye.

Artist Trading Cards are the latest big thing on my desk. The only two rules for ATCs are that they must be 2.5″x3.5″ or smaller and you must trade them. (If you sell them they are called ACEOs–Art Cards, Editions and Originals.) 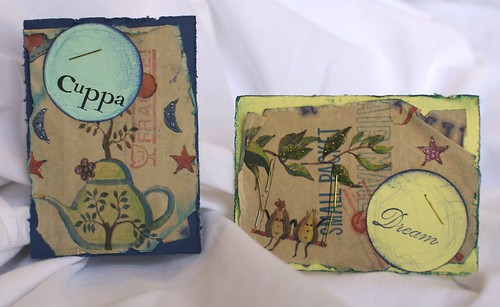 Click on the swinging onions to see all of the ATCs I’ve made recently.

I’ve been working on a variety of cards as ideas have crossed my mind. I finally took a break though because I had a bunch and wanted to photograph them before I started trading. Getting my camera to do exactly what I wanted took some actual thought but I’m glad I took the time because I learned some new things about the camera and then learned some more about how to edit the photos.

I’ve got a bunch more ideas in my head and I’ve bought a bunch of supplies, so I guess I haven’t exhausted the topic yet. I’ll post more photos as I get them done. Now off to get ready for Craft Night tonight!

From the “You Know It’ll Happen in the Future” department:

Authorities are now reporting that Allie Sutherland was potentially lured to her death through messages posted on Twitter, the popular online messaging service.

Allie received a “tweet,” or message, from someone known only as “goslo11” shortly before she left her apartment. Two days later, her body was found in a ravine several miles away. Police have not released details of how the 22-year-old was killed.

Sutherland was a history major at Oberlin College. Friends stated that she had been spending more and more time “tweeting” with strangers recently.

(Reuters) “Twexting” teens on the rise

Twitter allows users to sign up with fake email addresses and names, and it includes a service to make photos available freely online. The combination is proving irresistible to teens seeking a way to share shocking photos anonymously.

Nearly 10 percent of teens admit to “twexting,” according to a survey by the Pew Internet & American Life Project.

See? I do still remember how to post! We’ve had the stomach bug and now we’ve progressed on to the head cold bug. But never fear there are still cute photos of the kids to fill in the gaps between my actual posts.

This is what Liza does in the morning.

This is how Liza watches TV.

Just today I learned about a UNICEF ad starring the Smurfs that aired in Belgum back in 2005. I, er, wouldn’t let any kids watch this.

I was asked to pray during our church’s Easter Sunday service this year. I was a bit nervous about it, especially since I wanted to keep the prayer short while still touching on the themes of Easter week, from the darkness of the Friday crucifixion to the wonder of the Sunday resurrection.

Returning from the pulpit to the pew, I saw Eli beaming at me, and I was excited that something in my prayer had touched him. When I sat down, he leaned over to me. I bent down. He whispered in my ear, “Daddy! I like your tie!”

Because, really, everyone knows today is the happiest day of the year. Fellow US residents, now’s your chance to freak out that you waited so long before doing your taxes, or you can be smug about how early you were done.

Sadly, we greatly over-estimated how much we needed to pay and got back huge refunds. Sigh. Math is hard!