You go try it. It’s addictive to get the letters to look right together.

I’m going to be on three science-oriented panels at Dragon*Con, pretending that I know things. If any of you are there, stop by and say hey. My talks are:

RETURN TO SPACE PANEL: Ask The Experts
Friday, 1:00pm
Forsythe (in the Hilton)
The President says we’re going back to the Moon and then to Mars AND with manned crews. How hard will it be to get back to where we were when NASA ended the moon missions? How close are scientists to all the technology that will be needed to get to Mars and back? All your questions answered on plans to put man beyond Earth orbit – again.

Bose-Einstein Condensates, Fermi Superfluid Gases, and Other Weird States of Matter
Friday, 5:30pm
Henry (in the Hilton)
How you can cool atoms, make quantum fluids, and win a Nobel Prize. Note: Nobel Prize not included with talk.

Can This Hubble Be Saved?
Sunday, 2:30pm
Forsythe (in the Hilton)
We all love the Hubble Space Telescope, but it’s been sick for a while now. What are NASA’s plans for it, at least right this minute, and what can be done to make it easier to fix later?

I’m still giggling over being considered a space expert, but other than that, it should be fun. And look! I even have a bio up for the talks.

When I was a little kid, I hated Sunday nights. Worrying about going back to school on Mondays would make me almost physically ill. Not that there was anything I had to worry about at school really, I just dreaded giving up the leisure of the weekend. I hated getting started back on the weekday schedule and facing whatever unexpected excitement life had to throw at me.

I’m starting to feel that dread now on Thursdays. Last Friday our house got struck by lightning. The good news on that front is that we already got some money to fix the attic exhaust fan that was fried from the strike. We still haven’t heard from the Content Adjuster but I’m guessing we’ll hear from her early this next week and get started on the process of deciding what all our 5+ years old electronic equipment is worth.

Yesterday afternoon started out pleasant enough. Stephen got home early from an unusually long work week. Liza had taken good naps and was interested in hanging with dad. A friend from church brought us belated baby dinner so I didn’t have to cook last night. But as we were sitting down for after dinner play I heard the thunder. I had a moment of panic at the sound.

Nothing came of it and we did our usual process of going to bed at about 10 pm.

I woke up to the sound of thunder around 1:30 am. Big rumbling booms and long sustained flashes of lightning that lit up our bedroom. At first I just stayed in bed and waited for the rain, hoping the thunder and lightning would pay off. Then I heard Liza. The tiniest Granade had never heard thunder before. I went and cleaned up her 97th dirty diaper of the day and nursed her. Sometime in there the rain came. When it was time to rock her for her to go back to sleep, I turned her over to Stephen.

I went around the house peering out the windows to see the rain. Looking out my bedroom window I realized that Eli’s kiddy pool had blown off with the approaching storm. I went around again opening the blinds trying to see where it went. I told Stephen that I had decided to poke my head out the garage to see if it was leaning up against the garage door. I opened the garage door and the pool fell into the garage. I grabbed a few other of Eli’s toys from outside so they wouldn’t get carried away.

Liza started grumping about 3:15. She sounded so loud, it was if she were in bed with us. I reached over and turned the monitor down hoping she might miraculously figure out how to fall asleep on her own while I was trying to get some sleep. I had just muttered to Stephen at 3:45 that I wasn’t going in to her until she actually cried when she did. I went in to find her at the very end of the crib, one arm hanging out with her face all but pressed to the monitor that sits on the shelf just outside her crib. Her arm was stuck and once I untangled her she was happy to see me.

I changed another dirty diaper and sat down to see if she was hungry. (She typically only nurses once a night, if at all and it’s usually around 3:30. She had nursed at 2 and it was barely 4, so I wasn’t sure what she would do. She ate of course. She takes after me in that way.) I fell asleep sitting up in recliner while she was eating. Once she was finished eating, I fell asleep again while she was sitting up trying to burp. I got back in bed at 5:15.

I spent five minutes convincing him it was still nighttime. I crawled back into bed. Eli came in to chat with us about eight times between 6 am and 7:30 am, when I finally got up to start the day.

Our sad, brown lawn has turned insta-green with the application of rain. No appliances were damaged during the storm. The only thing hurt was my REM cycle. Maybe I can convince Stephen that I get a nap this afternoon.

If you are looking for me next Friday, I’ll be huddled in my closet praying for no rain.

Eli surprised me by wanting to feed Liza on Sunday when I produced the bottle. He was only interested in doing it long enough for me to snap a few photos though. Still it was a sweet moment.

Harmonix and MTV are now working on Rock Band, which expands the concept of Guitar Hero to include bass, drums, and vocals. Four people can rock out together. It’s like being in a band, only you don’t have to tell the drummer how much his original compositions suck.

We now know what some of the songs will be, from classics like The Who’s “Won’t Get Fooled Again” and the Rolling Stones’s “Gimme Shelter” to more recent songs like OK Go’s “Here It Goes Again”. The current list is just fine, I’m sure, but it doesn’t really have everything I’m looking for in a truly rocking game.

In fact, here are three songs that need to be included in Rock Band, in increasing order of rockingness.

3. Swingin’, by John Anderson (covered by The Johnston Brothers)

2. My Pal Foot Foot, by The Shaggs

Harmonix has a whole forum for suggesting songs to be included in Rock Band. What are you waiting for? Get over there and let’s put John “Not the One From Yes” Anderson, The Shaggs, and Bread over the top!

Yes, I suppose you could suggest other songs as well. If you must. 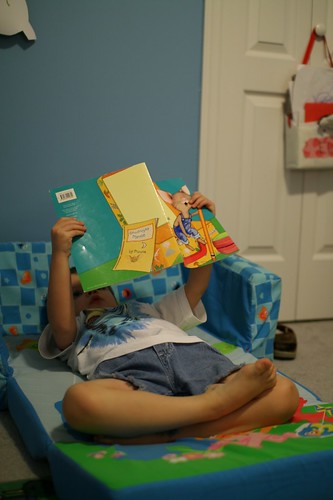 Stephen was only home for about an hour last night out of his 20 hour day. I managed to snap these few photos of him and the kids playing on Eli’s bed.

Today was Eli and Liza’s first day of Mother’s Morning Out. Eli will go on Tuesdays and Thursdays and Liza will go Tuesdays. Did you hear the Hallelujah Chorus this morning at 9 am? That was for me as I scurried from the church with no children nipping at my heals.

The two NASA Mars rovers, Spirit and Opportunity, are sometimes called the little robots that could. They’ve been chugging along the Martian landscape for over three years, returning scads of excellent data.

They’ve got nothing on the two Voyager probes.

Voyager 2 launched on August 20th, 1977; in a reversal of numbering, Voyager 1 launched on September 5th. Both probes were designed to visit Jupiter, Saturn, Uranus and Neptune. Because of how those four planets were aligned in the early 1980s, a single probe could visit all four by using each planet’s gravity to slingshot the probe towards the next one and do it in a reasonable period of time.

Instead of a single probe, NASA sent two, and they both worked beautifully. They found volcanoes on Jupiter’s moon Io, and discovered several new Jovian moons. They investigated Saturn’s rings. Voyager 2 visited Uranus and Neptune.

Both are still operating. Voyager 1 has gone farther than any other human-made object. It’s 100 times farther from the sun than Earth is, and is likely to cross the boundary between solar space and interstellar space. Voyager 2 is 80 times as far from the Sun as Earth is. They’ve got enough power to run until around 2020.

Not bad for two probes designed for a four-year mission.

Over at Brass Lantern, I got email about a new Boulder Dash sequel coming out. I hadn’t thought of that game in years and years. In it, you run around, digging out dirt, collecting gems, and using rocks to crush your many enemies.

You can, of course, download the original game and its many clones and play them in emulators, but surely, I thought, someone’s done a Dashalike in Flash. And indeed they have: Acno’s Energizer. The goal’s different: instead of gathering gems, you’re energizing a teleporter so you can go to a new level and, er, do it all over again. But the gameplay is very similar to the original, and has the puzzly elements I enjoyed so much about the original.