A couple of weeks ago, Stephen and I hit the Blue Plate Cafe in Huntsville. We went with the specific intention of a review. It’s a pretty good place to eat if you dig the “meat and three” kind of lunch.

We went early because we’d heard it’s always busy. It’s a good thing because it was already hopping when we got there and they have a super tiny parking lot. Stephen parked the Fit in a median that is obviously not meant for cars and yet his roller skate fit there fine. We went in and were given a seating number that conveniently had the menu printed on the back.

And here’s where I tell you about my blond moment.

I was shocked that there were only three choices listed under each day of the week.

I told you it was a blond moment.

I wanted more choices! Where was the actual menu? Maybe these were only the specials listed here? But no, that was pretty much the menu minus the breakfast items, which weren’t being served at lunch. I read my list of three more carefully. I’m not a picky eater by any means but I still wanted the option of choosing something from a big menu. Then I calmed down and remembered the name. OK, I thought, this is part of the shtick, I get it now.

Stephen and I were chatting about our mornings, waiting to be seated, when a friend from church and one of his coworkers walked in. We talked with them until our number was called and we went to our table. When we got there it was a table for four so we invited the guys to sit with us and frankly, the company was the best part of the lunch.

I had chicken and dressing, corn cooked to mush — i.e. Southern style, mashed potatoes, corn bread and, in a turn that can only be Southern, bread pudding that counted as a vegetable. Stephen ordered pretty much the same plate as I did. Afterwards, I vowed to check with him the next time we go to eat, so that we can get different foods and can try more of what the restaurant has to offer. Matthew, you are totally going to have to give me some reviewer tips!

The food was hot and filling and not bad by any means. The service was ultra fast and the company was fun. Would I go there again? Meh. Ten years ago, I would have thought it was a fabulous restaurant. But now? I like vegetables to actually be a bit closer to their raw state, with a whole lot less boiling action. Stephen and I tend to eat spicier foods than we used to, so while the food wasn’t bad, it’s just not to my taste any more. But the atmosphere of an upscale diner was pleasant. The accidental company was the bright spot and for that, I don’t regret the lunch.

Andy Baio has a long post describing Infocom’s efforts to make Restaurant at the End of the Universe as a text adventure. It would have been the sequel to their version of Hitchhiker’s Guide to the Galaxy (which you can play online) that’s mentioned at the end of the game. Andy has internal Infocom emails discussing the game and stub versions of the game-in-progress available to play.

Some time ago I showed Eli the Flash game You Have to Burn the Rope. He immediately wanted to play it again.

At this point I estimate we’ve played it twenty times.

It got to where he would tell everyone who came to our house about the game. And that’s when I wondered, what would happen if I asked him to review it?

[tags]You Have to Burn the Rope, video game, review, so simple even a four year old can play it[/tags]

Wednesday, Wendy lured us on a small hike with a picnic in the middle and then a hike back.

Pause for a moment and think about:

Wendy has no idea that I nearly called her 14 times before we left to say we weren’t coming. Well, I guess she knows now if she’s reading this post. But I got my act together and only forgot Liza’s hat and a spoon with which to feed her. Now you know why she is wearing her sweet potato stained hoodie in most of the photos.

We had a great time and Eli produced almost zero whine until we got in the car to go home when I made the mistake of telling him about ticks. Bad mom! 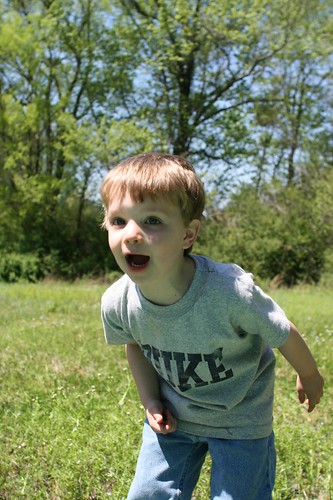 Click the photo for more pictures from the hike.
Special thanks to Mike Self for helping make up captions for the photos.

It’s been a while since we’ve let you hear Eli singing. He sings all the time, making up songs about whatever is going on in his life, like eating breakfast and playing Zack and Wiki. In this case, he’s singing about friends.

Let me not indulge in false modesty. I have amazing hair.

I easily have the hair of a woman twice my age. People cannot keep their hands off of it. They tousle it. They pet it. They say, “Liza, you have such beautiful hair. How do you get it to be so full, so shiny, so full of bounce and life?”

Usually I smile and coo, never divulging my secrets. But you, internet, all of you are my true friends. For you, I will tell you.

Chunks of banana rubbed into your hair twice daily will provide necessary nutrients, and impart a shine to it that can be had no other way. Let it sit, so that your split ends and over-processed strands can soak up what it needs to be beautiful. Before you leave the house, wash it out of your hair to avoid the amorous attention of fruit bats.

Late post, I know but it’s been busy around here what with the weather and my Frankenstein laptop! (More on that later!)

Eli striking a pose! I actually got a photo of him with his eyes open and his mouth closed.

Liza doing what Liza loves best — Looking at books! As if in this household, she even got a choice on that one.

We were just driving home from a friend’s house. I was looking at the clouds back toward where our subdivision is and I thought to myself that it looked like a “funnel cloud.” I’ve never seen a funnel cloud before but it looked exactly like how I’ve always heard them described. It was moving pretty fast and by the time we got to our neighborhood it was well beyond us. As I was turning in, I got a good look at the clouds behind us and sure enough there was another one. I tried to get into the house to get my camera but by the time I got the kids in and got the camera, it had moved on as well. As I was settling Eli into bed for a nap, the weather warning sirens went off. They were a little too late for my taste.

All this after I watched a video on a weather website this morning about how most people’s chances of seeing a tornado is under 4% for their whole lifetime and that’s if they live in places like Oklahoma and Kansas. It’s lower than 1% if you live in the Northwest or New England.

So now that I’ve seen two funnel clouds in one day, does that mean I’ve seen my weather for my lifetime?

In case you missed it, here’s Liza’s rather narrow perspective on life:
I Can’t Imagine Why Anybody Would Want To Stop Crying.

Ok, really it’s an Onion article, but this part sounds exactly like Liza:

Take my parents, for example. If it wasn’t for my tireless efforts, they’d sleep through the night! Can you believe it? I don’t think it’s because they’re too oldâ€”I suppose I don’t know how old they are exactly, but I can’t imagine it’s any more than, say, one. They’ve still got plenty of life in them. Yet they hardly ever cry, and when they do, it’s usually softly, in the middle of the night, and exhausted-sounding. What happened to their lust for life? Don’t they realize that every moment they waste sleeping, fiddling with the car seat, or holding picture books in front of my face is precious time they could be screaming their heads off?