Kyoto holds the largest chunk of history of the parts of Japan we saw. The temples and gardens are close enough together that we kept running into the same pack of tourists. 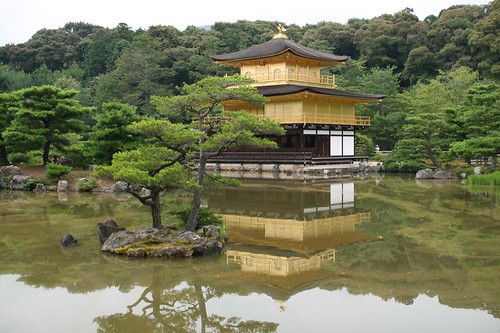 Click on any of the pictures to see all of the photos from Kyoto.

The Zen garden at Ryoan-Ji was possibly my favorite spot on the whole trip. There were scads of other people there but it didn’t interrupt the few moments of contemplation I took. I thought of all the other people who had sat there before me and looked at those perfect rocks. It filled up a space inside of me that I am still thinking about and don’t really understand. 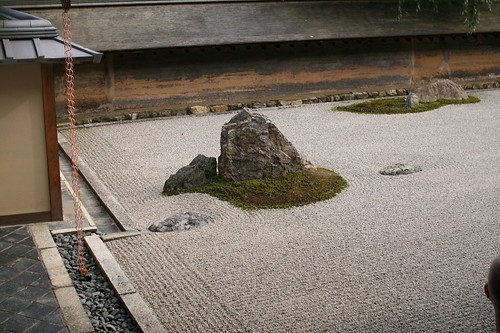 The Gion Matsuri parade was another chance to contemplate Japan’s history. The festival began in 869 to aid in ridding the country of bad spirits that the emperor thought was causing an epidemic. We got to see Kyoto street life and a parade. The huge floats were pulled by about 50 attendants and they were both amusing and petrifying to watch. 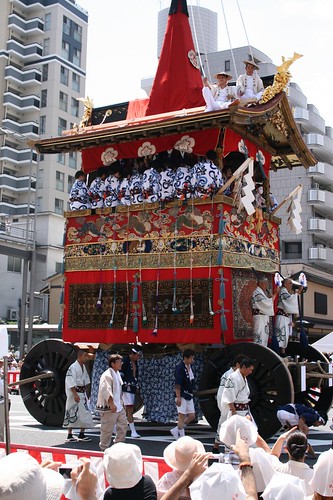 To turn each one involved engineering and levers and chants and an elaborate fan dance. The men riding didn’t even flinch as it wobbled and scooted its way around corners.

I’m still blown away that, out of 365 days we could have been in Kyoto, we were there for Gion Matsuri parade day.

Our trip to Gion was a tangle of walking down narrow alleys lined with old-fashioned wooden sliding doors. 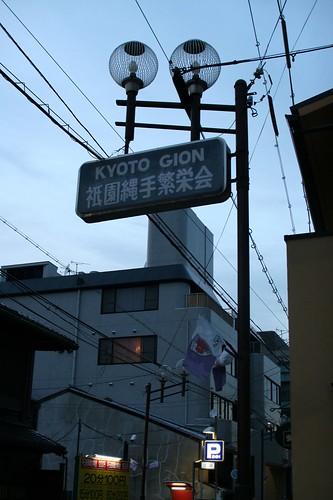 At irregular intervals there would be a family shrine celebrating a family spirit. Often there were flowers for the spirit to enjoy or water for them to drink. Sometimes the idol would be covered to ward off the chill. Almost all bore the backward swastika that is the Buddhist symbol for the cycle of life. 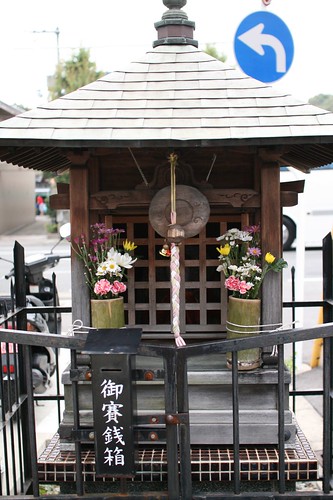 We succumbed to a tourist trap to see a geisha. We had dinner at a beer garden so we could talk with an apprentice geisha and see her perform a traditional dance. The food was so westernized we almost didn’t recognize it after so many days in Osaka and the more traditional fare we had there. The maiko was a sweet child who loved to dance. She started when she was 15 and is now just 18. She’d learned to play four musical instruments, but her true love was the traditional geisha dancing. 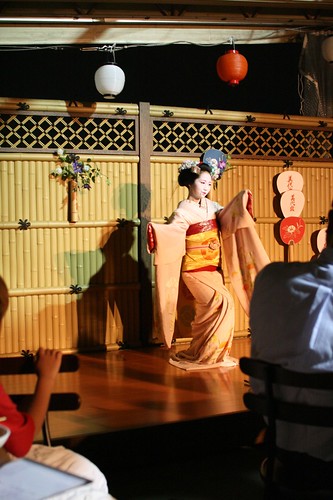 We wondered how she felt at having to entertain two dozen Westerners who knew nothing of her traditions and heritage, sipping beer while missing the subtleties of her beautiful dance. As we were discussing her kimono, hair and make-up I mentioned something about the intricacies of how her make-up was applied. John commented that absolutely nothing about her was accidental. I’ve been thinking about his comment off and on ever since.

That fairly well sums up all of Japan for me. Noting there seems accidental. Everything, everybody is polished to a very high shine but it all seems absolutely effortless.